Is Global Warming caused by us? 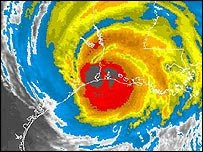 I suppose we are now at the point that we have to accept the science 'fact' that Global Warming is taking place. Nearly every day there is a new story in the news that supports this. The BBC has a great mini site dedicated to Climate Change. One of the most recent stories is related to the disappearing ice and snow on Kilimanjaro. However, with the recent winter being the warmest on record and the weather over the last 3 weeks being abnormally warm and dry fo this time of year - people do start to aske questions. So - we can establish that the weather is different, that we dont quite get the same winter extremes that we used to and that spring plants and butterflies, bees and wasps are all out a lot earlier. But the BIG question remains - is this caused by us or is this part of the natural cycles of world climate. Would this have happened normally even without our input and production of the so called 'greenhouse gases'? For me, that is the big question and I am not quite sure that the proof is quite there yet.
In saying that how can reducing our carbon emissions and the amount of chemicals and pollution that we pump into the atmosphere be anything but a good thing - but will it help to reduce the way that our climate changes . . . that is the big question. What do you think?
22nd April 2007

I came across this quote as I have been reading Barack Obama's book - The Audacity of Hope.

"Just about every scientist outside the White House believes that climate change is real, serious, and is accelerated by the continued release of carbon dioxide. If the prospect of melting ice caps, rising sea levels, changing weather patterns, more frequent hurricanes, more violent tornadoes, endless dust storms, decaying forests, dying coral reefs, and increases in respiratory illness and insect-borne diseases - if all that doesn't constitute a serious threat, I dont know what does."

Geography is not important anymore

One of my friends has just bought a Sat Nav system for his car. Thats one of those gadgets that sits in the front of your car and tells him where to go. Now, as a fellow gadget freak he expected me to already have one and was surprised that I hadn't already got one. I hate them. I really, really despise those GPS things. Its because I love maps (too much!) I love the look of maps, I love finding places and I especially love to plot routes. I love having to plot my route from one place to another. For me, that is part of my holiday. Normally about 3 weeks before I go away in the summer I get out my atlases and maps and plot my route - where will I go, where will I stop etc. Sat Nav systems take the fun out of planning. They take the randomness out of it. the thrill of finding something unexpected. Of course, there is also the argument that these things also cause more accidents as people watch them and fiddle with them as well. My friend's comment also was - guess that meand you dont need to teach maps anymore - I wish. But I'll bet that most of the people with SatNav systems have NO idea what all those symbols actually mean on the screen . . . . .
Over the summer I was reading that fewer people now take A levels and GCSE exams in Geography than ever before. Shock! The education system has gone from about 15 A Level subjects and options to about 500 different subjects and options. Of course Geography (and every other subject ) was going to lose out. The big question that Geography teachers need to be considering is if they are making their geography relevant. This summer has proven (yet again) the need for geography in schools. Bad weather? Rivers that flood? Earthquakes? Cities that are expanding? Farming catastrophes and Foot and Mouth disease? Ice caps that are melting? These are the things of Geography. The news is filled with Geography from start to finish. We need to make sure that our students understand the implications of these issues - the things that are behibd the news. Geography is more imporant today than at ANY other time! 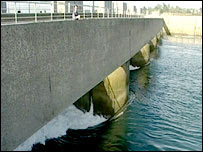 This week some plans were announced to put a tidal barrage across the Severn estuary from Wales to England. This would help to create 'green energy' - ie we would not have to burn fossil fuels and would generate about 5% of ALL of the energy needs for the whole of the UK. Wow! That is some plan. Green energy is finally here. Who would oppose such a thing? Guess who - that's right. the environmentalists because of the impact it would have on the environment. Read more about the barrage here or you can look at the for and against arguments. They will be telling us that nuclear energy is not safe next . . . . . .
Tuesday 25th September 2007
Posted by T Manson at 5:23 PM No comments: 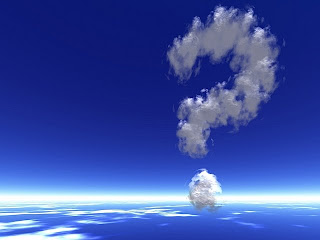 Geography questions - from the site!
Why was the weather so weird during the summer? Why are some countries (like Australia) having massive droughts? Why are some countries so dry that forest fires are destroying huge areas of land (like Greece)? Why are some countries experiencing too much rain - like the flooding in India and England? Why are fish stocks in Peru being killed by changing sea temperatures? Why are the global ice caps melting at a frantic rate? Why does where you are born matter so much? Why are people in Africa poor? Why do the midges travel 150 miles just to bite a cow and give it Blue tongue disease? Why do volcanoes erupt all the time? Why is Foot and Mouth disease a bad thing? Why do some people think that wind turbines are actually BAD for the environment? Why is the sky blue? Why do people think the world might be made up of liquid? Why do earthquakes kill more people in poor countries?
Thats just some of the things that I have been thiking about this week. These are my questions. What are yours?
Posted by T Manson at 5:21 PM No comments:

I want one of these. Is that bad? I have been reading Jeremy Clarkson's book recently which I suppose as opposite as you can get to being an environmentally friendly geography teacher. To Clarkson, I am probably some sort of tree-hugging friend of Bill Oddie who thinks we should all ride about on milk floats. But the big question is just how bad are cars? Does the amount of pollution taht gets pumped out of exhausts cause a noticeable difference to the environment? Are cars bad? If so - why have we not got good enough replacements yet. I cant actually get a bus from my house to my work - there just isnt a bus that would get me home and anyway I normally have to get to Belfast to pick the kids up before I get home. It would take me about 5 hours to get home using public transport. Give me a fuel efficient, low emission, non-carbon burning car and I will be happy. I dont want to pollute the environment but give me better options. Please.
Monday 21 January 2008
Posted by T Manson at 5:20 PM No comments: 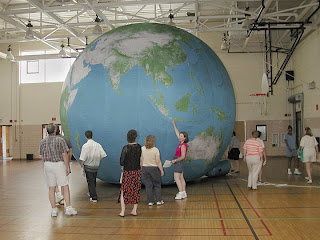 There has been a lot of stuff on the news this week about the low standards of Geography teaching in England and Wales. In a report by the BBC they claim that Geography must be made more relevant. I suppose I find it hard to believe that it isnt! Everything we teach is part of the world - part of the bigger picture - part of the macro ecosystem of the world that we live in. I cannot think of any more relevant subject - global warming, debt, poverty, migration, aids - these are the issues that make up the news and these are the things of geography. Maybe teachers need to refresh their case studies a bit and maybe we need to protect the specialism that is geography rather than let it be diluted into 'popular science'. Our job is to teach how the world works. Do we do it? The President of the RGS (Royal Geographical Society) - Dr Rita Gardner replied that
"Young people have a tremendous curiosity about the world, and there are few subjects more relevant than geography. Indeed, it remains one of the most popular subjects at GCSE. Through forthcoming curriculum changes and enhanced professional development opportunities and resources, I am convinced that geography will become sufficiently interesting and engaging for that curiosity to be stimulated for all our children.”

The Impact of Natural Disasters 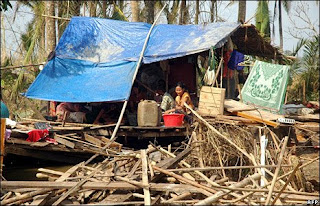 I live in Northern Ireland. Northern Ireland is not afflicted by huge measures of natural disaster. We dont get volcanoes. We dont get earthquakes. We dont get huge amounts of rainfall or drought. We dont get huge tropical cyclones parking off the coast and controlling our weather for weeks on end. I suppose we are pretty lucky. Over the last few days we have seen some pictures of the impact that a cyclone has had on Burma. To date about 22,000 are deads with another 40,000 lost. If this happened in NI what would our response be? It would be on every channel 24/7. We would know everything about the loss of life and the impact on people. Yet again, I feel that we are selling this crisis short. We need to see the problem. We need to see how we can help and we need to see how we can help countries like this make sure that something like this is minimised iun the future. Maybe it just that our countries have been navel-gazing recently - worrying about the global credit crunch and house prices falling that we are more worried about the state of our finances compared to the survival of others. Let me finish with one fact.
Average annual wage of a subsistence rice farmer in Burma (of which around 17,000 are now dead) = $150
Average amount of money spent by students in my school on school dinners in a year = $1000 (£500)
Do the maths!
7th May 2008
Posted by T Manson at 5:15 PM No comments: